The standout moments that matter the most in my career, always go back to the people I’ve met. It takes a special spirit to follow the call of the ocean. To become a captain, you need a hunger for adventure and love a challenge. You must be quick on your feet, logical, and able to stay calm under pressure. Good Captains are a rare breed, and when I met Mark Laser in 2018, we instantly clicked.

Mark called about a listing of mine, a Lagoon 450 “Chapter Two.” The listing was under contract, so I was able to find him a different vessel in the Bahamas.  Eventually, we put that Lagoon 450 “Dakota” under contract and it was renamed “Paradox”, a play on the fact that Mark and his wife Amy Knorr were both doctors. After closing, Mark kept the boat in the Bahamas until April 2019 when he called me to help put together a crew to bring the vessel back to the US. 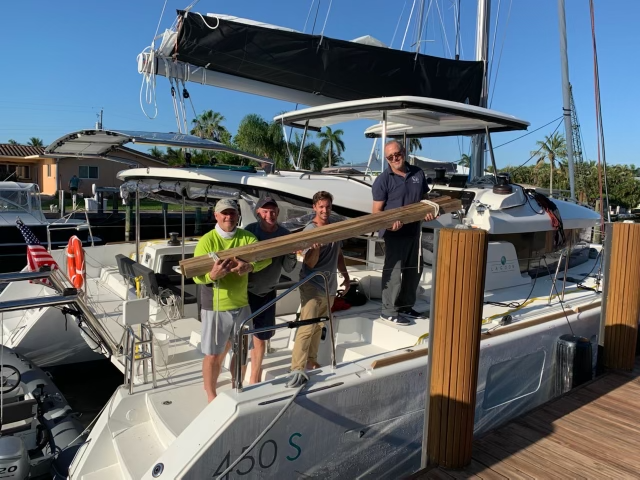 The first season (fall of 2019), Mark took the boat from CT to Norfolk, where I met him, Amy, and another crew member. We became good friends quickly. You could tell, Mark had a zest for life. He loved being on the water. Amy describes him as the type of person who “seized every opportunity” and always “had an adventurous spirit.” Amy said their first date was spent riding Mark’s motorcycle and while courting her, he got his pilot’s license and they spent time together flying in little prop planes. Yes, he was a bit of an adrenaline junkie, but he was also extremely smart. Before he became an OBGYN, he was an astrophysicist, working on experiments to travel on the Space Shuttle. An incredible mind and an incredible man.

Once I met the boat in Norfolk, Mark, Amy, and I with the other crew member Pat took their vessel offshore for 14 days, from Norfolk to Antigua in late 2019. After spending a couple of weeks in the center of a big blue moving disk that is the ocean, naturally you develop a close understanding of the people you are with.  Mark and Amy were like teenagers experiencing their first moments of love during the entire trip to Antigua.  It was a joy to watch.  I am so happy to have been able to share that experience with them. The rest of that season Amy and Mark cruised the southern Caribbean until he fell ill with what was later diagnosed as COVID in February 2020.

Mark went to a hospital in Saint Martin, but medical staff quickly realized he needed intensive care, so he was transported to a hospital north of Miami, not too far from where I lived. Amy rented a home nearby, anticipating she’d receive him soon upon discharge. At this time, the entire world was shut down and I did what I could to support Amy by coordinating grocery delivery and such. I was anxious for my good friend and felt helpless. I wrote the following Facebook post, hoping my professional expertise would support fellow Mariners in crisis. 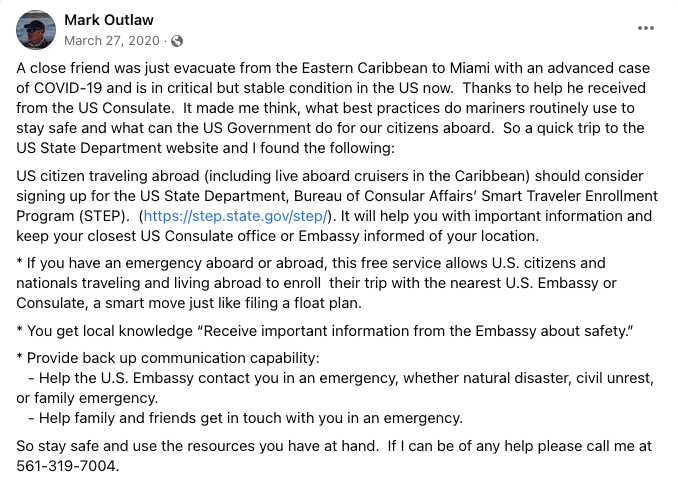 Finally, it was clear Mark wasn’t going to make it. Amy’s goodbye from the island would be the last time she’d see him alive. He passed away the first week of April 2020. Devastated, Amy needed to return home. I brought her luggage so she wouldn’t have to deal with shopping at a store during the pandemic, but my mind was focused on how I could be of the most service to them both – dealing with their beloved boat. Mark was the captain, and Amy didn’t want to become a captain and live the nautical lifestyle without him.

Because of Mark’s emergency evacuation, Amy was forced to abandoned Paradox at anchor in Marigot Bay (the French Coast Guard was aware).  One of Mark’s sailing buddies and I arranged for it to be taken care of, and have it sailed back to the States.   But what then?  This boat needed a new owner and soon. I couldn’t imagine leaving Amy with the responsibility of caring for Paradox.

Because of our relationship she asked me to help, and I was anxious to do something for her. Despite the world being upside down, I was able to find a buyer and we had it sold in less than a month, for the same price Mark and Amy had paid for it two years earlier. The speed of the sale was in great part due to the care Mark took in keeping the boat in Bristol condition, his large inventory of spares, and the extensive tool kit provided with the boat.  Also, because of our record keeping practices, JFA produced extensive documentation for the boat which made the sale go smoothly. 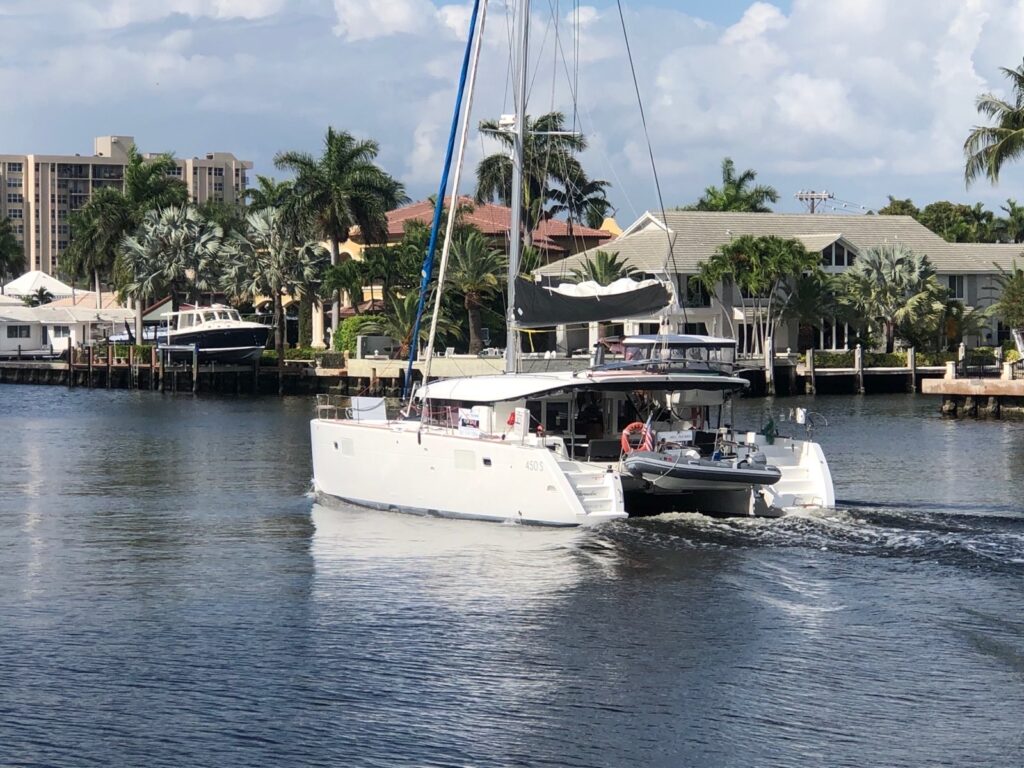 Since the sale, I have stayed in touch to make sure Dr. Amy Knorr is doing well.  I still do what I can to honor Mark and take care of business. When the boat’s new owners reached out to get additional historical information on the vessel, we produced it at JFA in short order, directly to the new owners, sparing Amy from having to relive any painful memories.

In tribute to Mark’s generosity of spirit, talent, and love of life, in April of 2020 I gladly supported a fundraiser his daughter Kelsey started on social media to support the Saint Martin hospital that first gave Mark care under very uncertain circumstances with limited resources.

Mark will forever be special to me, and I’ll look back on our memories at sea fondly. It is so rare that dreams come true and if only for a short while, Mark’s dream certainly did blossom to the fullest, inspiring those who knew him to continue living our lives to the fullest, just as Mark did.  Godspeed Mark Laser, a great Captain, and a great man! 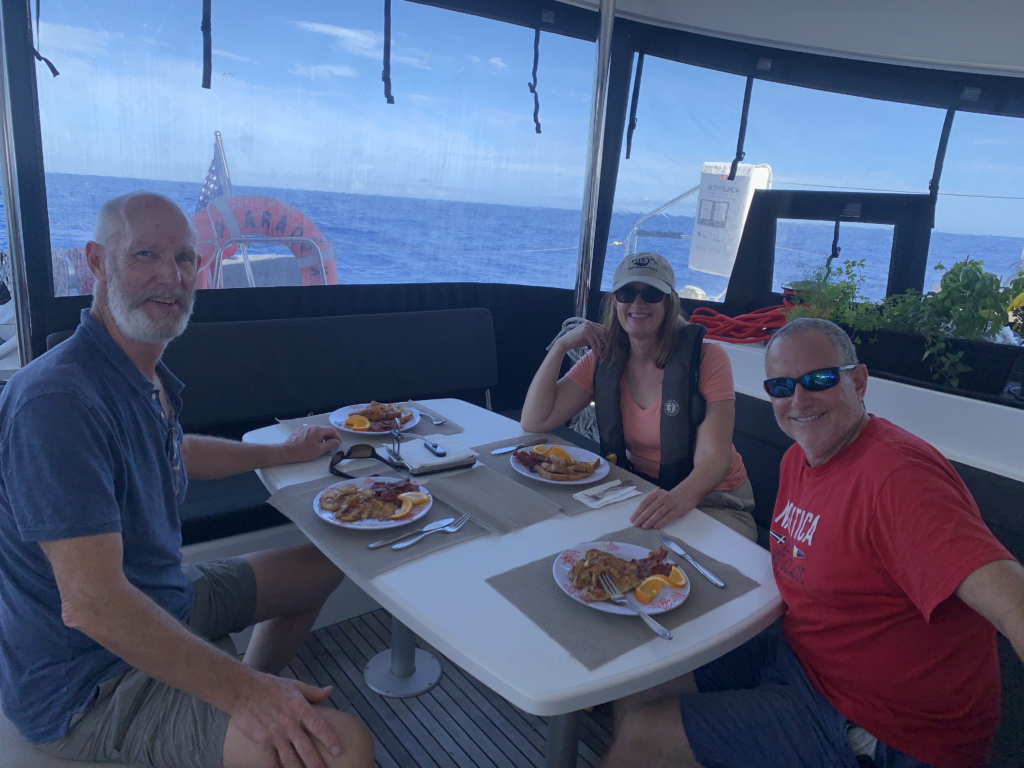 (Left to Right, Pat, Amy and Mark at breakfast about 120NM south of Bermuda)

A Captain’s Recommendation: The Exumas
March 1, 2022